🛎 Check out the latest episode of Super Live Adventure 🛎 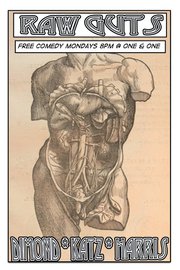 I'll be performing at Raw Guts tonight at 8:00.  It's a new free comedy show that takes place every Monday at One and One on 12 1st Avenue & 1st Street in NYC, hosted by James Harris, Tim Dimond

Tomorrow night I'll be at the Creek and the Cave for Savage Practice, a free comedy show featuring stand-up, live sketch comedy, and videos.  The show starts at 9:30 at 10-93 Jackson Avenue in Long Island City.

For those of you on Staten Island tomorrow night, my monthly show, Super Live Adventure, will feature a special surprise guest host in my absence.  I'm very upset about missing this one, as we have Erik Bergstrom (Grimmer Tales

), Robert Dean, and Sid Cohen on the show, plus a video from Far Fetched.  Super Live Adventure is a free monthly comedy show that takes place at Full Cup, 388 Van Duzer Street, Staten Island, NY.
Posted by John Szeluga at 11:00 AM